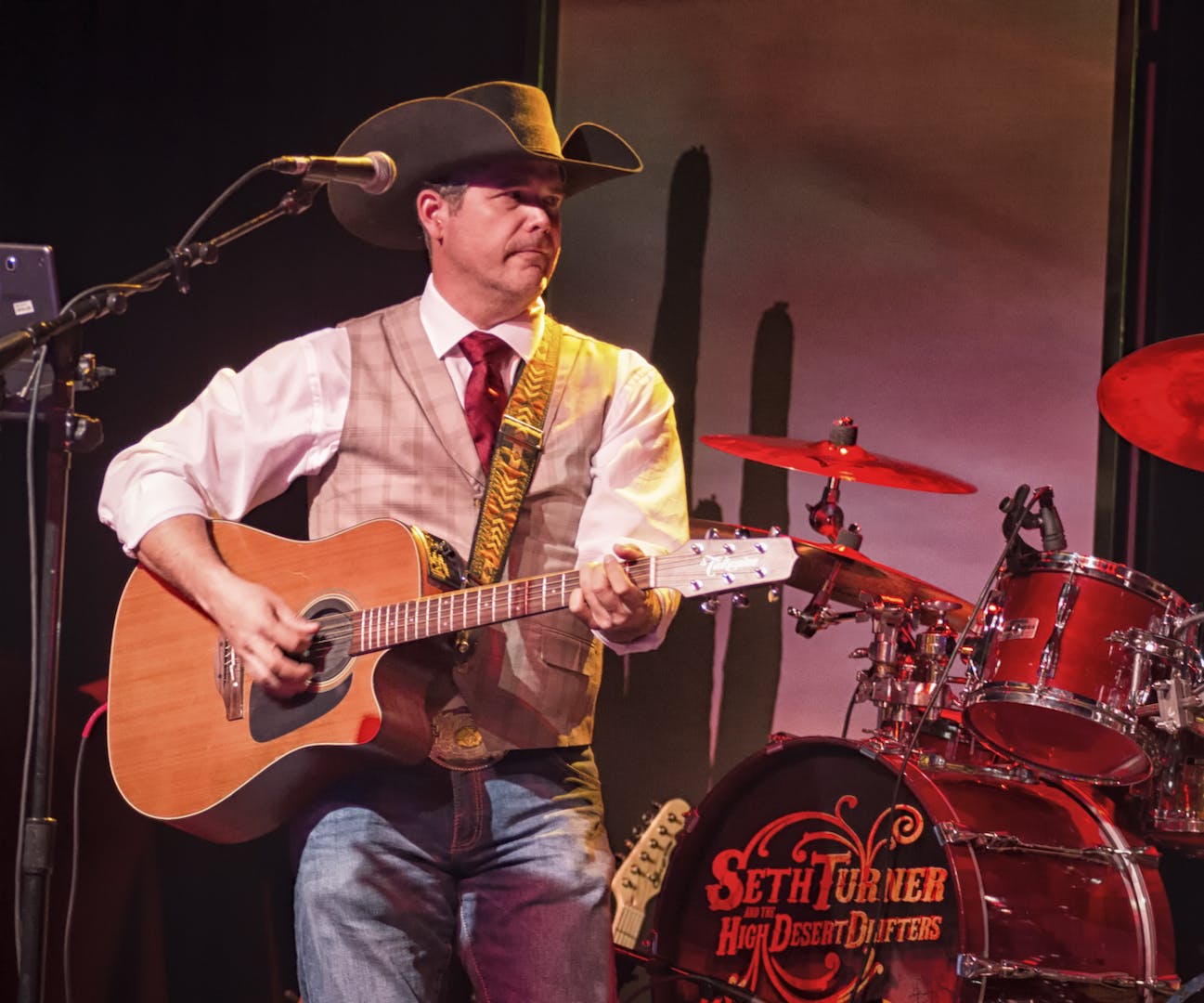 and The High Desert Drifters

Several years ago Seth started out down a road he hoped would lead him to Nashville. Those several years and roads later took him there and back again. In 2008 his path intersected six others on the music road. Today, they are known as Seth Turner and The High Desert Drifters, a collection of exceptional performers from all over our country and from many walks of life. A wide array of personalities are on display in this group which is shown on every stage they take, in every city they travel. Their music ranges over generations and genres while always staying true to their roots. You get more than a show with this group, you get an experience. They were voted the only Country Music band in the top ten local bands of The Las Vegas Review Journal’s “Best of Las Vegas” for 2013.

“I have spent a decade and a half writing about independent, Americana, and Texas music. I've been blessed to call some of the best pickers and songwriters who have ever drawn breath my friends. But I'm gonna say this once. Only once. And I'm right. Seth C Turner is a gift. One of the best I've ever heard. There is a past. There is a present. And there is a future. In Seth's voice, all are present.”

"His voice stops me in my tracks every time I hear it. Solid Country S-O-U-L. He's got the writing to match it, too. One of the best I've heard in a long, long time."

“[His] traditional essence is very reminiscent of the legendary Merle Haggard, yet Seth offers his own boyish charm and vocals that set him apart and define him from so many others... ”

“Seth Turner is a true traditional country artist that is the "total package", he not only writes and plays, but also sings in a style reminiscent of Dwight Yoakam. It's just a matter of time until Las Vegas loses him to Nashville .”

“Seth comes across with a fresh, honest sound of a guy who's lived the life. One of the better storytellers I've heard, and definitely a voice to be reckoned with. The look, the sound, the stories - the package. Seth's got it!”

“In Texas, we have a tendency to think our music and musicians rule. But that rule occasionally gets broken. Seth C. Turner proves to be another fine exception to that rule. He is "Roadshow Approved!"

“Musicians are magicians. They conjure. They can make things appear that weren't there before and produce sights sounds and feelings that were once hidden. Seth Turner is a wizard. He can turn a Vegas lounge into an old honky-tonk somewhere outside of Dallas. With the flip of a pick and a twang he can bring a dead room to life. When he sings his own brand of country music he takes you to that place where you really live. He brings you down dirt roads past open fields and mountain scenes to that place in your heart where horses run and cowboys mend fences, where saloons pour whiskey for good people living the good life. Seth's style, sound, and music conjure that kind of country magic.

Today's country music has evolved into a new pop-rock genre of music that many say ain't really country. Though Seth Turner and his band The High Desert Drifters can rip that new country style like nobody's business and bust out requests from Seger to Springsteen, Seth shines when wielding the Haggard and Jennings magic wand. The real Seth Turner magic comes alive, however, when his original music appears on stage.

Ladies and gents, cowboys and cowgirls, episode 20 is Seth Turner.”

And many more venues and cities....